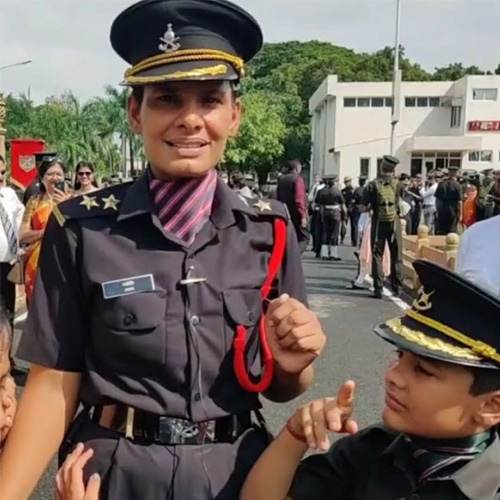 With the memories of her late soldier husband and carrying their two uniformed children on her shoulders, 33-year-old Jyoti Nainwal joined 28 women cadets at the passing-out parade of the Officers Training Academy.

Her husband, Naik Deepak Nainwal died in May 2018 of injuries suffered while fighting terrorists in J&K’s Anantnag a month earlier.

“I am the proud daughter of Deepak Nainwal,” said 9-year-old Lavanya as she waved at her mother from the gallery with her seven-year-old brother, Reyansh.

Jyoti Nainwal has been commissioned as a lieutenant and is the first member from her side of the family to join the Army.

“I would like to thank my husband’s Mahar Regiment. They stood with us through thick and thin and whatever I am today is because of the regiment,” said the former homemaker from Uttarakhand’s Dehradun.

Jyoti, a postgraduate in economics, had started preparing for the Service Selection Board test for entry into the armed forces officer cadre soon after losing her husband. On clearing the test, she underwent 11 months of training at the Chennai academy.

A total of 153 cadets were commissioned on Saturday. Among them, sixteen men and nine women from Afghanistan, Bhutan and Maldives, also completed their training.

Vice-Chief of the Army Staff Lt Gen CP Mohanty said women officers have been playing a significant role in the Army over the past few decades.