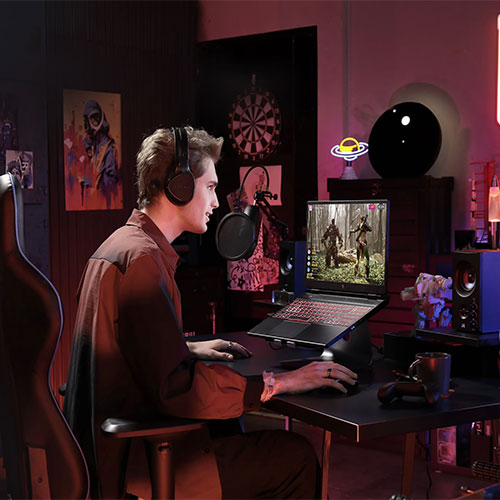 The latest NVIDIA GeForce RTX 40 Series GPUs are powered by the ultra-efficient NVIDIA Ada Lovelace architecture which delivers a quantum leap in both performance and AI-powered graphics. Gamers can experience life like virtual worlds with ray tracing, massively boost performance with DLSS 3, and get a competitive edge with Reflex.

The new Nitro 16 (AN16-51) gaming laptop comes with a 5% larger screen area than its predecessor and features an upgraded 16-inch WUXGA or WQXGA display with a 165 Hz refresh rate that supports NVIDIA Advanced Optimus, allowing users to dynamically switch between the integrated graphics and discrete graphics without having to reboot. It comes with a 4-zone RGB backlit keyboard and keeps colors bright with 100% sRGB color gamut support and a boosted 84% screen-to-body ratio for a more attractive viewing experience.

The new Windows 11-based Acer Nitro laptops come with up to 32 GB of DDR5 4800 MHz memory, and up to a massive 2 TB M.2 PCIe Gen 4 storage so players can save more games, movies, and streaming footage on hand. Both laptops also come with one month of Xbox Game Pass or PC Game Pass, giving gamers access to hundreds of popular PC titles.

These Nitro devices have dual fans, four fan outlets located at their sides and rear, upper air intake, and are further supported by liquid metal thermal grease to aid cooling over intense gaming periods. They each come installed with NitroSense software and a dedicated NitroSense key, allowing users to monitor their systems’ temperatures, as well as adjust fan speed and power performance settings to keep the hardware running as cool as possible.

Each model comes with Killer DoubleShot Pro and is Killer Wi-Fi 6 1650i enabled to provide more bandwidth. To heighten the gameplay and streaming experience, these laptops feature an HD camera, two microphones, and two speakers with DTS:X Ultra audio so players can fully immerse themselves in lush soundscapes. The new Nitro gaming laptops also possess a range of superb connectivity options with a HDMI 2.1 port, a microSD card reader, two Thunderbolt 4 ports supporting Power Delivery, and three USB 3.2 Gen 2 ports, with one that allows for offline charging.