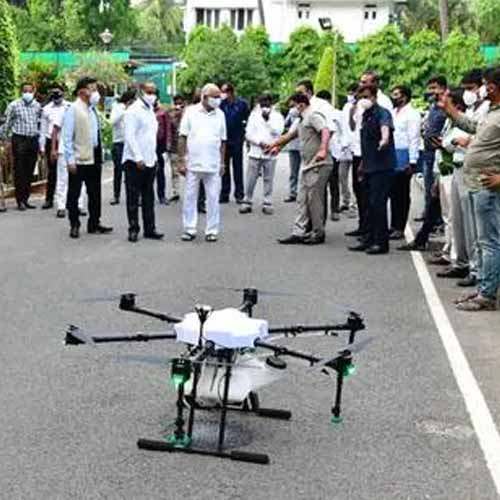 Chief Minister B S Yediyurappa launched a drone-based sanitation initiative for Bengaluru .The exercise, taken up by Bengaluru Central MP P C Mohan, and his special task force that was formed two weeks ago to tackle Covid-19 in his constituency, in partnership with Garuda Aerospace, a start-up which ensures sanitisation of the Lok Sabha segment over the next 10 days with the help of drones.

The Chief Minister said that after trials, drones could also be used to delivery of medicines and Covid-19 vaccines. “I have partnered with the drone company to sanitise the whole of Bangalore Central using drones over the next 10 days. This is a service I am undertaking for my constituents and no charge or costs will be transferred to the State Government. The drones can be used for medicine and vaccine delivery if the BBMP permits it and allows trials,” MP P C Mohan told TNIE.

Earlier in the day, while launching the service, Yediyurappa said, “For the first time in our country, drones are ready to supply medicines and sanitise public places. I appreciate the efforts of Garuda Aerospace in this domain and MP P C Mohan for partnering with them.” He added that the drones being used now can take a payload of up to 40 kg and deliver medicines and vaccines in tough terrains.

In a statement, Garuda Aerospace said their drone - The White Knight - is capable of carrying a payload of 35-40 kg , is equipped with a temperature-controlled module and has an endurance capacity of two hours. “The White Knight drone has been in the research & development phase for the last two years to execute aerial delivery of emergency medicines, food and packages,” it added.