Consumer Spending On Technology To Clock $1.69 Trillion In 2019 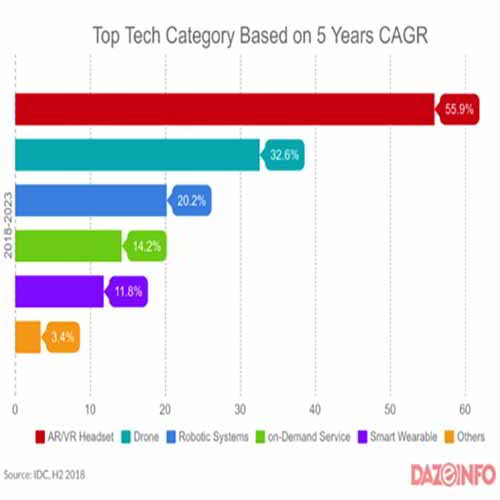 A new report by International Data Corporation (IDC) on Friday forecasted estimated figures of consumer spending on technology in 2019 and during the 5 year period from 2018 – 2023.

The report, titled Worldwide Semiannual Connected Consumer Spending Guide, revealed that the amount consumers spend on traditional and emerging technologies will reach $1.69 trillion in 2019 showing a year over year increase of 5.3% as compared to 2018. It also predicted consumer expenditure on technology will be increased with 5.1% compound annual growth rate (CAGR) by 2023, with consumer spending estimated to reach $2.06 trillion.

The data compiled and presented in the Worldwide Semiannual Connected Consumer Spending Guide is collected from various different markets in the context of fixed parameters. These parameters are:

* Use Cases: Use cases are the situations the concerned technology is used in. Some common use cases are entertainment, augmented/virtual reality games, education, household maintenance and automation, information, personal assistance and wellness, etc.

* Innovation types: The technology could be emerging or traditional.

Traditional technologies will account for three fourth of consumer sending in 2019. About half of this amount will be claimed by telecom services, the remaining will be accounted for by expenditure on mobile phones and personal computing devices.

The 5 year (2018 – 2023) CAGR of emerging technologies will be 13.2%. Thus, the demand for technologies like AR/VR headsets, subscription services, smart home devices, robots, and wearable gadgets will be able to make up about a third of consumer spending by 2023. 90% of this growth will be attributed to on-demand subscriptions and smart home devices like smart speakers, automated lighting, smart TVs, etc.

Entertainment will mainly take shape in the form of streaming/downloading of videos, tv shows, and movies. In keeping with this, virtual reality video viewing will have a CAGR of 47.3%. Music streaming and online/downloadable game will also be popular. Augmented reality games will absorb the largest chunk of consumer expenditure with an expected CAGR of 136.3%.

Technology providers are also blending digital and physical experiences, and this includes an evolving area and new addition to IDC’s Worldwide Semiannual Connected Consumer Spending Guide: on-demand services. On-demand services enable access to networks, marketplaces, content, and other resources in the form of subscription-based services and includes services like Netflix, Hulu, Spotify and others. Additionally, the top technology categories according to IDC’s data between 2018 and 2023 are AR/VR headsets, drones, robotic systems, on-demand services, and smart wearables.

During the forecast period, the expected CAGR of traditional technologies will be considerably slower in comparison, with a predicted 2.2% increase.

The three largest markets for consumer technology in 2019 are The United States ($412 billion), People’s Republic of China ($382 billion), and Western Europe ($227 billion).

Telephone services and mobile phones will show the highest demand and purchase in all three regional markets and the spending growth rate in China will be the fastest out of all regions in the forecast period, clocking in at 6.8%.