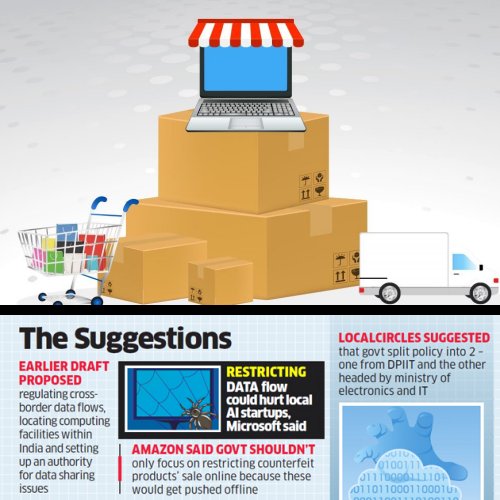 The government has extended the date for feedback submission on the draft policy on e-commerce by three weeks. With this announcement the e-commerce firms operating in the country have time till March 31 to submit their feedback.

The relaxation comes in the wake of a demand by these companies for a separate policy on data with easier sharing norms. This announcement has come after a brief discussion with the Department for Promotion of Industry (DPIIT) and the stakeholder discussion with the Amazon, Snapdeal, Microsoft, MakeMyTrip, RIL and eBay have raised their concern to come up with a broader policy where the traders and buyers as well as retail trade and banking could under one umbrella.

The meeting was also attended by the industrial bodies including CII, FICCI, and CAIT .However, there were few corporates could not participated in the consultation and they are Google, Facebook and Walmart .

The main discussion was on the data localisation factor. During the discussion , Microsoft emphasised that the restrictions on cross-border data flow, India’s innovative AI startups could be hurt. Whereas, Amazon said that the policy must not only focus on restricting the sale of counterfeit products online because these products can be pushed via offline channels.

It was the first meeting being called after the 40-page draft policy released by DPIIT on 23rd February. The draft covers half a dozen issues related to electronic commerce including data, infrastructure development, regulatory concerns, marketplaces, among others.

Talking on the discussions Praveen Khandelwal, General secretary, CIAT says, it is a futile exercise to pressurise the government to bring the policy to their advantage. Whereas, there were another lobby group including Snapdeal and ShopClues and others are planning to form a group by the name: “The E-commerce Council of India” to empower and safeguarding their interest.