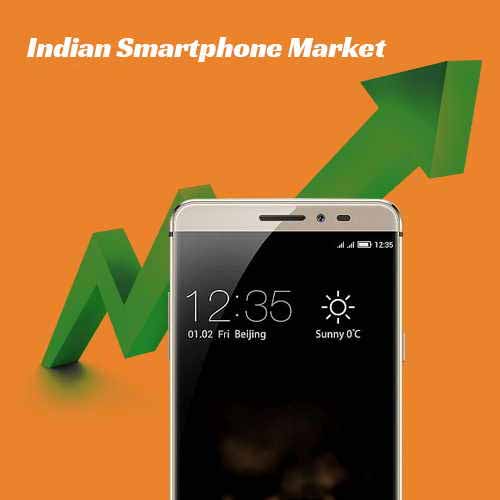 "Despite the efforts towards multi-channel retailing by almost all vendors, the online channel continued its growth momentum fueled by multiple new launches, attractive offers and affordability schemes like EMIs/cashbacks. This resulted in YoY growth of 12.4% for the online channel with an overall share of 36.8% in 2Q19," says Upasana Joshi, Associate Research Manager, Client Devices, IDC India.

The overall market ASP stood at US$159 in 2Q19 with 78% of the market below US$200 price segment. However, the fastest growing segment was US$200-300 with 105.2% YoY growth. This was mainly due to the demand from customers looking to upgrade, additionally fueled by China-based brands which are bringing innovations and flagship like design language at mid-price segments.

Joshi further adds, "US$400-$600 was the second-fastest-growing segment with 16.3% YoY growth in 2Q19. OnePlus led this segment with a 63.6% share at the back of newly launched OnePlus 7 series. In the premium (US$500+) segment, Apple bettered Samsung for the leadership position with an overall share of 41.2% in 2Q19 as the iPhone XR demand saw an uplift after the price drop and aided by heavy promotional activities.

The feature phone market continued its decline with 32.4 million-unit shipments, registering a drop of 26.3% YoY in 2Q19. This was due to lower shipments of 4G-enabled feature phones with 40.3% YoY decline in 2Q19. The 2G feature phone segment also declined as challenges remain for Indian brands along with small players facing heat owing to duty hikes on imports. 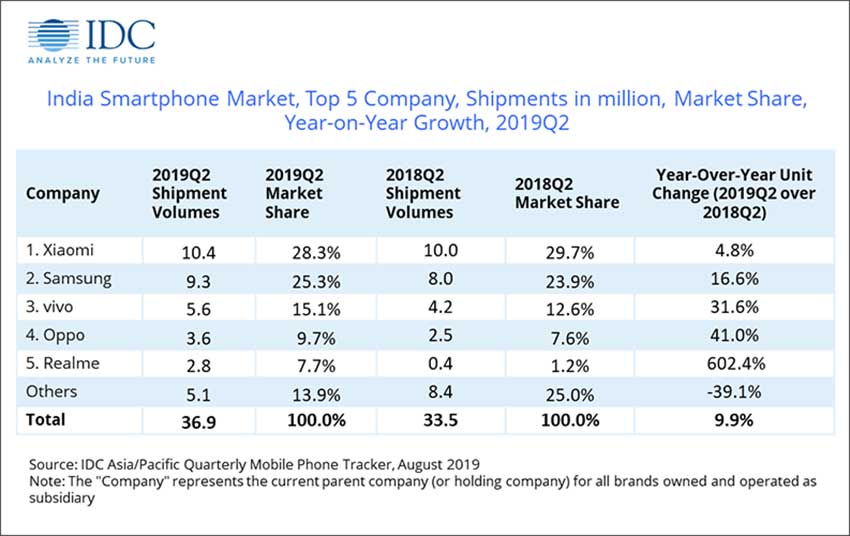 Xiaomi saw its shipment volume grow by 4.8% YoY in 2Q19 with Redmi 6A and Redmi Note 7 Pro as the highest shipped models in the overall market. Xiaomi also maintained its dominance in the online channel with a market share of 46.5%, along with growing footprint in the offline channel which accounted for 39.5% of Xiaomi shipments in 2Q19.

Samsung registered a strong 16.6% YoY growth in 2Q19 fueled by newly launched Galaxy A series across low and mid-price segments. Galaxy A10 and A2 Core were amongst the top 5 models overall for the market. The vendor was also offering attractive channel schemes to clear the stocks of Galaxy J series. Galaxy M series (exclusive online till the end of 2Q19) saw price reductions which helped retain the 13.5% market share in the online channel in 2Q19 for Samsung. 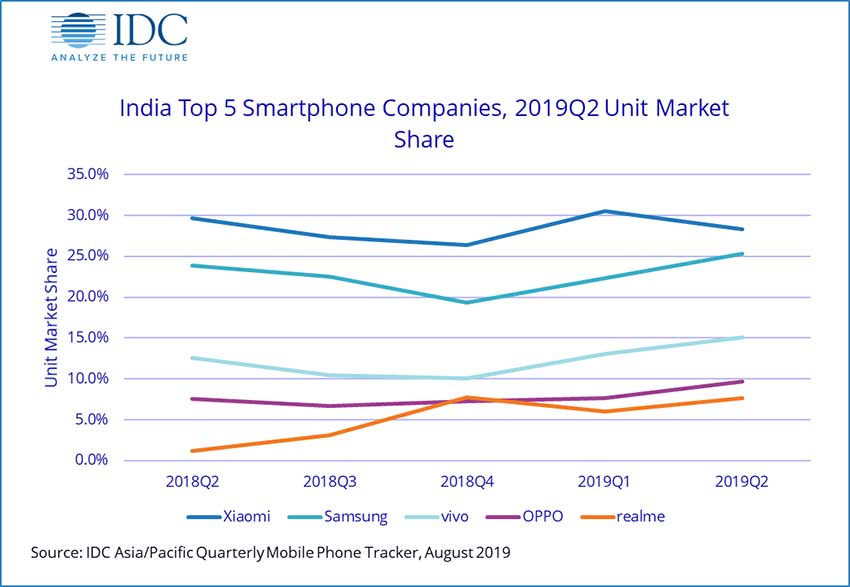 OPPO had a strong quarter with YoY growth of 41.0%, because of affordable A series - A3s and newly launched A1K and A5s. Online channel accounted for 19.1% for the vendor-driven by online exclusive model "K1".

Realme saw multifold growth YoY in 2Q19, driven by newly launched model C2 and 3/3Pro series. The vendor was second in the online channel with 16.5% market share in 2Q19, along with ongoing efforts for expansion in the offline channel which accounted for 21.0% of its shipments in 2Q19.

Navkendar Singh, Research Director, Client Devices & IPDS, IDC India observes, "India smartphone market will continue its growth trajectory in the 2nd half 2019, but the consolidation of top few brands will continue. This will make it much more challenging for smaller players to find niches of growth. A very strong 2H19 is essential to bring double-digit YoY growth in the fastest-growing smartphone market of this size globally. We should expect continued aggression by the online heavy brands and eTailers in the next few months fueled by new launches and price reductions of last few launches, leading up to the festive season in October. We will also see a much more competitive offline market play going forward, with all the major brands fighting for limited shelf space, which will make the retail channel very critical for any brand's success."