Noida’s Supertech twin towers will be razed to the ground in just nine seconds: Report 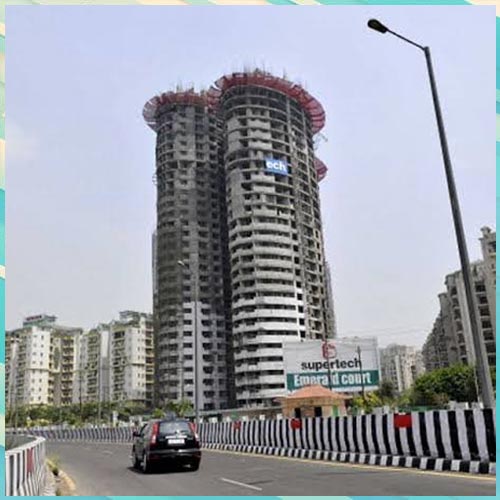 The illegal Supertech twin towers in Noida will be razed down on May 22 by using up to four tonnes of explosives. The implosion of the nearly 100-metre tall structures would take just nine seconds, according to officials.

When the implosion takes place at 2:30 pm on May 22, around 1,500 families living in close vicinity to the towers located in sector 93A would be moved out of their homes for around five hours. The officials said that a stretch of the Noida-Greater Noida Expressway close to the site would also be shut for traffic for an hour. According to the demolition plan shared by Edifice Engineering, the company which has been handed the job, security personnel would be deployed in the area in large numbers on the day.

The Supreme Court had ordered the demolition of Supertech's Apex (100 metre) and Ceyane (97 metre) on August 31 last year as the twin towers had come up in violation of building norms. It also rapped the local Noida Authority for approval of the project under its watch.

Sharing a presentation with the media, Utkarsh Mehta, partner at Edifice, said Ceyane (31 floors) will collapse to the ground first followed by Apex (32 floors).

The company had previously demolished the 108-metre tall Bank of Lisbon in Johannesburg, South Africa in 2019 with an implosion.

South Africa-based Jet Demolition is providing expertise on the blast for safe implosion and a trial blast would take place ahead of the actual implosion.

"Explosives between 2,500 kg and 4,000kg will be required. A test blast has been planned in the last week of March or the first week of April to optimise the use of explosive vis-à-vis safety measures," Mehta said.

While the actual implosion would take only nine seconds for the towers to be razed, the groundwork preparation is already underway. This includes removal of structures like electrical fittings, plumbing items, doors and windows. Walls are also being demolished to reduce the amount of rubble the implosion would create.

According to Noida Authority officials, experts will examine Emerald Court and the buildings in the vicinity for damage assessment after the implosions.