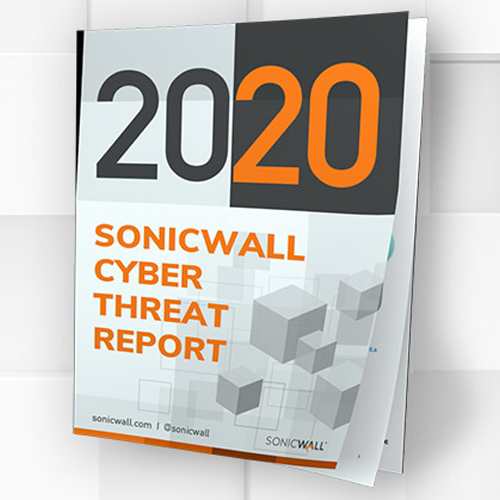 “Cybercriminals are honing their ability to design, author and deploy stealth-like attacks with increasing precision, while growing their capabilities to evade detection by sandbox technology,” said SonicWall President and CEO Bill Conner. “Now more than ever, it’s imperative that organizations detect and respond quickly, or run the risk of having to negotiate what’s being held at ransom from criminals so embolden they’re now negotiating the terms.”

The 2020 SonicWall Cyber Threat Report provides in-depth information and analysis of the cyber threat landscape. Major findings of the report include:

The Internet of Things (IoT) is a treasure trove for cybercriminals: Bad actors continue to deploy ransomware on ordinary devices, such as smart TVs, electric scooters and smart speakers, to daily necessities like toothbrushes, refrigerators and doorbells. SonicWall Capture Labs threat researchers discovered a moderate 5% increase in IoT malware, with a total volume of 34.3 million attacks in 2019.

Cryptojacking continues to crumble: The volatile shifts and swings of the cryptocurrency market had a direct impact on threat actors’ interest to author cryptojacking malware. The dissolution of Coinhive in March 2019 played a major role in the threat vector’s decline, plunging the volume of cryptojacking hits to 78% in the second half of the year.

Encrypted threats are still everywhere: Cybercriminals have become reliant upon encrypted threats that evade traditional security control standards, such as firewall appliances that do not have the capability or processing power to detect, inspect and mitigate attacks sent via HTTPs traffic. SonicWall Capture Labs threat researchers recorded 3.7 million malware attacks sent over TLS/SSL traffic, a 27% year-over-year increase that is trending up and expected to climb through the year.

Side-channel attacks are evolving: These vulnerabilities could impact unpatched devices in the future, including everything from security appliances to end-user laptops. Threat actors could potentially issue digital signatures to bypass authentication or digitally sign malicious software. The recent introduction of TPM-FAIL, the next variation of Meltdown/Spectre, Foreshadow, PortSmash, MDS and more, signals criminals’ intent to weaponize this method of attack.

Attacks over non-standard ports cannot be ignored: This year’s research indicated that more than 19% of malware attacks leveraged non-standard ports, but found the volume dropping to 15% by year’s end with a total of 64 million detected threats. This type of tactic is utilized to deliver payloads undetected against targeted businesses.

The 2020 SonicWall Cyber Threat Report is the result of threat intelligence collected over the course of 2019 by over 1.1 million sensors strategically placed in over 215 countries and territories. SonicWall Capture Labs threat researchers collected and analyzed over 140,000 daily malware samples, blocked over 20 million daily malware attacks and recorded 9.9 billion malware attacks. SonicWall Capture Labs spotlights attack trends to help organizations and users stay ahead of cyber threats as attackers become more targeted and move into business-critical systems.

To download the complete report, please visit www.sonicwall.com/ThreatReport. For current cyberattack data, visit the SonicWall Security Center to see the latest attack trends, types and volume across the world.