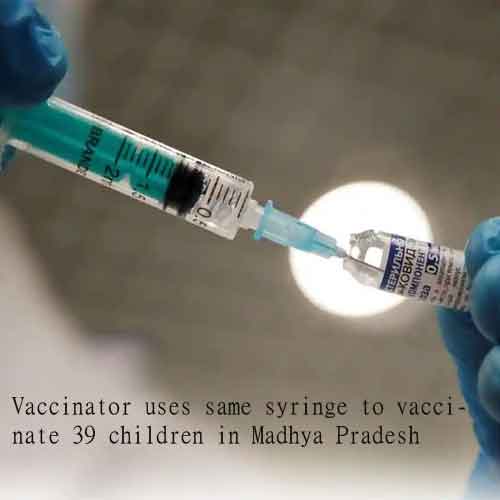 An FIR has been registered against a vaccinator, identified as Jitendra Ahirwar, who used the same syringe to administer Covid-19 vaccine to 39 children, district officials said.

The incident took place on Wednesday at a private school in Madhya Pradesh's Sagar city that has soon come under fire. The incident came to light when parents of some of the students at Jain Higher Secondary School saw the vaccinator using the same syringe on the children.

Meanwhile, Ahirwar escaped from the spot and was not found when the CMHO inspected the school. An FIR was lodged against him at the Gopal Ganj police station under Section 336 (rash or negligent act endangering human life or personal safety of others) of the Indian Penal Code (IPC).

On the basis of a report by the CMHO, a departmental probe and action against district vaccination was ordered by the district collector.

Health officials examined all the 39 children and found the reports of 19 of them to be normal. Reports of the remaining children were awaited, according to Goswami.