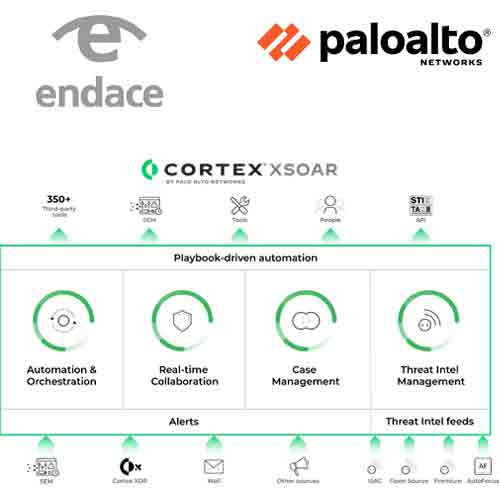 Analysts can leverage Cortex XSOAR’s integration with Endace’s InvestigationManager and EndaceVision for detailed packet level investigations across global EndaceProbe estates. This lets them pivot from an investigation in Cortex XSOAR directly to the global packet history related to that incident to extend their investigation and drill down to investigate associated network activity such as lateral movement, data exfiltration or command-and-control (C2) traffic.

Cary Wright, VP of Product Management at Endace, comments, “Security teams are desperate to combat alert fatigue, streamline workflows and accelerate investigations to provide certainty when responding to network threats. The combination of Cortex XSOAR’s powerful orchestration and automation capabilities with the rich network history recorded by the EndaceProbe Analytics Platform gives security operations access to the conclusive forensic evidence they need to respond quickly and accurately to threats.”

Cortex XSOAR is an extended security orchestration, automation and response platform that unifies case management, automation, real-time collaboration and threat intel management to transform every stage of the incident lifecycle. Teams can manage alerts across all sources, standardize processes with playbooks, take action on threat intel and automate response for any security use case - resulting in significantly faster responses that require less manual review.

The EndaceProbe Analytics Platform combines 100% accurate, network-wide packet capture with the ability to host and integrate with a wide range of commercial and open source network security and performance solutions to deliver definitive evidence for troubleshooting network and application performance issues and responding to cyberthreats.