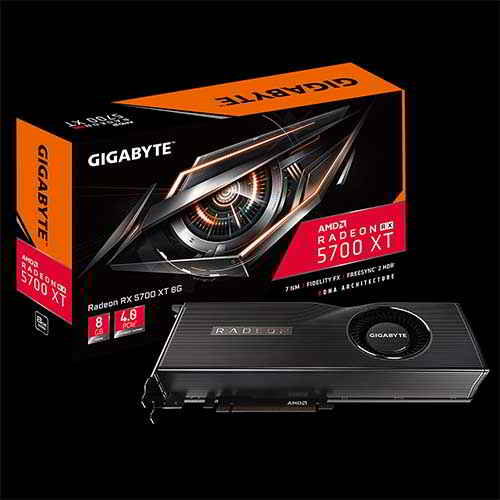 GIGABYTE tends to each component for gamers. GAMING OC series graphics cards are cooled by the WINDFORCE 3x cooling system that comes with triple unique blade fans with alternate spinning fans design which turns the middle fan in the opposite direction so that the airflow direction between the two fans is the same, reducing turbulence and enhancing airflow pressure. The thermal cooling solution includes 5 copper heat-pipes with direct touch GPU and the heat from the GPU will be dissipated rapidly via conductivity effect. By those thermal dissipation methods, GIGABYTE WINDFORCE 3x cooling system makes graphics cards keep low temperatures during the working state and brings more stable and efficient performance.

GIGABYTE Radeon RX 5700 XT GAMING OC 8G and Radeon RX 5700 GAMING OC 8G use a better power phases design to allow the MOSFET to operate at lower temperatures and include over-temperature protection design,load balancing for each MOSFET, plus Ultra Durable certified chokes and capacitors to provide excellent performance and longer system lifespans. Black metal back plate not only strengthens the overall structure but also prevents the PCB from bending or falling parts and makes the external design look more textured. Moreover, GAMING OC graphics cards have LOGO lighting on the card side so gamers can synchronize various lighting effects with other AORUS devices by clicking on RGB Fusion 2.0. It also allows users to adjust the diversified gaming atmosphere they have in mind.