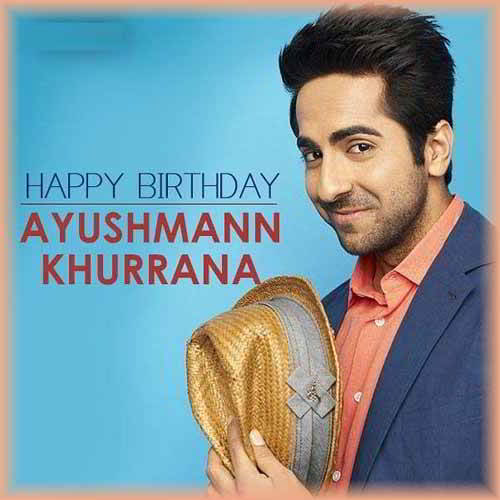 Ayushmann Khurrana born as Nishant Khurrana on 14 September 1984 celebrates his birthday today. Known for his portrayals of ordinary men often battling social norms, he is the recipient of several awards, including a National Film Award and four Film fare Awards, and has appeared in Forbes India's Celebrity 100 list of 2013 and 2019. Ayushmann won the second season of reality television show MTV Roadies in 2004.

A package of anchor, VJ, Actor, singer, Ayushmann stepped on the silver screen in 2012 with a rom-com Vicky Donor. The film not only allowed setting his foot on the big screen, but he also took the black lady (Film fare award) home, for his debut film Vicky Donor.

Following a brief setback, he starred in the commercially and critically successful romance Dum Laga Ke Haisha (2015). Ayushmann went on to establish himself with the comedies Bareilly Ki Barfi (2017), Shubh Mangal Saavdhan (2017), Badhaai Ho (2018), Dream Girl (2019), and Bala (2019); Shubh Mangal Zyada Saavdhan (2020) and Gulabo Sitabo (2020) co-starring Amitabh Bachchan. He also set his foot in thriller Andhadhun (2018); and the crime drama Article 15 (2019). His performances as a blind pianist in Andhadhun and an honest cop in Article 15 won him two consecutive Filmfare Critics Award for Best Actor, and he also won the National Film Award for Best Actor for the former.

In addition to acting, Khurrana has sung for several of his films, including the song "Pani Da Rang", which earned him the Filmfare Award for Best Male Playback Singer.

After post grad in journalism, his first job was as an RJ at BIG FM, Delhi. He hosted the show Big Chai – Maan Na Maan, Main Tera Ayushmann and also won the Young Achievers Award in 2007 for it. He was the youngest recipient of the Bharat Nirman Award in New Delhi.

He also worked in many other MTV shows such as MTV Fully Faltoo Movies, Cheque De India and Jaadoo Ek Baar. He then turned television host with a multiple-talent-based reality show India's Got Talent on Colors TV, which he co-anchored with Nikhil Chinapa, and Stripped, which gave latest updates on the Indian TV industry with a comic tinge, again on MTV. At the end of the year, he was also the anchor of the singing reality show Music Ka Maha Muqqabla on STAR Plus.

Apart from hosting the second season of MTV Rock On and India's Got Talent on Colors, Khurrana was also a part of the anchoring team of Extra Innings T20 for Indian Premier League Season 3 on SET Max with Gaurav Kapur, Samir Kochhar, and Angad Bedi.

Following which he took up the offer of anchoring the dance-based reality show Just Dance on STAR Plus.

Ayushmann’s social media is been flooded with good wishes for his birthday! We wish the actor a Very Happy Birthday as well.