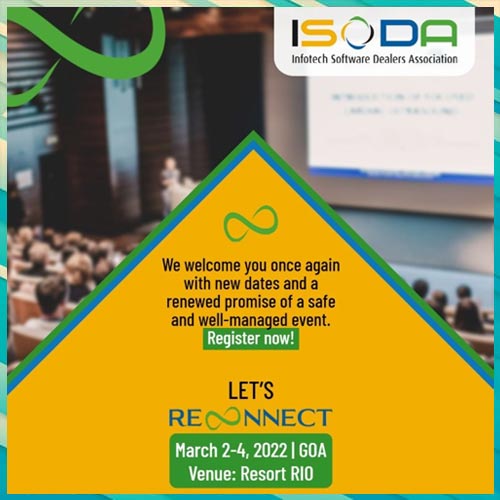 Recently organised 11th edition of Tech Summit ,a three days event starting from 2nd to 4th march 2022 in Rio Resort in North Goa was absolutely a memorable event ,where the members have come forward to attend the event which they have been waiting to connect with ISODIAN friends after a period of 2 years, where VARINDIA was the Media partner of this event.

The three days event was attended by 100 plus attendees, majorly they are the key decision makers of the company were attended the event and each session was full of interactive and the theme Re-connect is clearly justifies with the content designed by the team ISODA with various knowledge sessions and lots of fun.

ISODA – Infotech Software Dealers Association - was formed in 2008 to bridge the gap between Software Manufacturers & Distributors and Partners, uniting them and helping them to forge a new trade alliance and forming an invaluable network in the industry.

Today, ISODA consists of 200+ member organisations engaged in the full gamut of software, hardware, solutions and services across the Country. Collectively, ISODA members are constantly engaged with the who’s who of the Indian Industry servicing their IT needs. ISODA is now the leading voice, representing software Resellers in India. Its recommendations now have acceptance in the software industry ecosystem. Regular Cadence between Vendors and Distributors and now TDAI

The event was kick started with the welcome address by Alok Gupta, Chairman, ISODA, he has started his presentation by taking pledges along with all the attendee to use only Genuine software and spoke on why is important to use the Genuine Software.

There were corporate presentations from Gold Sponsors including Logmein, now renamed as GoTo, Microsoft and Ingram Micro, SOTI,SOPHOS, Schneider, Thales, Savex Technologies( Avaya and Motadata) and in the Silver sponsor category Kapittx, Teamviewer, GFI Software and Endpoint Protector had presented on the theme Re-connect.

The ISODA Management Committee is focused on enabling collaboration among members for upselling, cross-selling, and growing together and the event was attended by all the Regional secretaries starting from the West , Gujarat , South , East , North-East, North and Jaipur .

Secondly, the special attraction in the event was respecting the patriotism ,to address the session, Mr. Umesh Gopinath Jadhav a resident of Bengaluru had addressed the session, where he had shared his experience in travelling across India in the year since the Pulwama terror attack and met families of all the 40 martyrs to collect soil from their houses and cremation grounds to build a memorial for them. Umesh had travelled over 1.15 lakhs kms across 28 states and 8 Union Territories to meet the families and collected soil from martyr’s homes to make an ”India Map” as a symbol of respect for them. He spoke on how the statement of “Once a Soldier, Always a Soldier” is truly justifies ,which is a true respect for the Indian soldiers protecting our country.

There were various round table meetings were organised among the vendors and partners and Finally, there were various recognitions for the partners who were the members more than 10 years in ISODA, overall it was an event not to be missed.