Microsoft, Adobe and SAP are geared to strengthen campaign against Salesforce 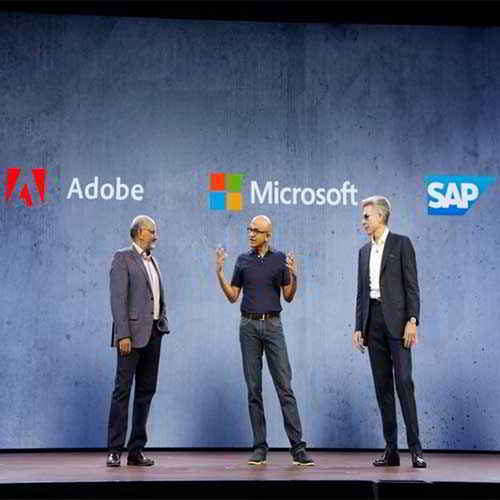 Adobe and Microsoft revealed additional details about the Open Data Initiative (ODI) in last September and made the alliance stronger by join the hands together with Adobe, Microsoft and SAP for a newer approach to business data that will help companies transform their customer experiences through real-time insights delivered from the cloud and also they can ready fight with the growing competition from Salesforce. Now, HP is the latest company to show interest in tapping the Open Data Initiative technology.

The three partners outlined a common approach and set of resources for customers in an initial announcement last September, with the ambition of helping customers create new connections across previously siloed data, more seamlessly garner intelligence, and ultimately better serve brands with an improved view of their customer interactions.

The ODI has been focused on enhancing interoperability between the applications and platforms of the three partners through a common data model with data stored in a customer-chosen data lake. This unified data lake is intended to allow customers their choice of development tools and applications to build and deploy services.

With the fruits of the Open Data Initiative, companies will no longer need to have engineers spend time getting all their data ready for further crunching, nor will they need teams of data scientists. For instance, in a few clicks a business user will be able to send data from enterprise software like Microsoft Dynamics, Adobe Experience Platform or SAP’s C/4HANA into the Azure Data Lake data warehouse service that’s available in Microsoft’s public cloud. Richard Riley, senior director for Microsoft’s Power Platform series of products says.

The data gets cleaned up so that it can all be aggregated together in an agreed-upon format. From there, artificial-intelligence systems can make predictions based on all the available data, which can then be sent back into the enterprise software from Microsoft, Adobe and SAP. Secondly, With the cloud-based Dynamics 365 of Microsoft could use the program to boost its Sales product, which lags behind Salesforce’s Sales Cloud. Daniel Newman, principal analyst at Futurum Research, said he’s confident the Open Data Initiative will help that campaign. Simultaneously Microsoft is looking to get more usage of Azure through the project.

Whereas, Salesforce has been moving more and more into Microsoft’s space with its cloud-based offerings into the software companies by acquiring the app integration company MuleSoft and data analytics company Tableau, both of which can hook in with on-premises systems. The Open Data Initiative announcement came a few months after the MuleSoft deal. With this there is a choice to the customers to choose their option.