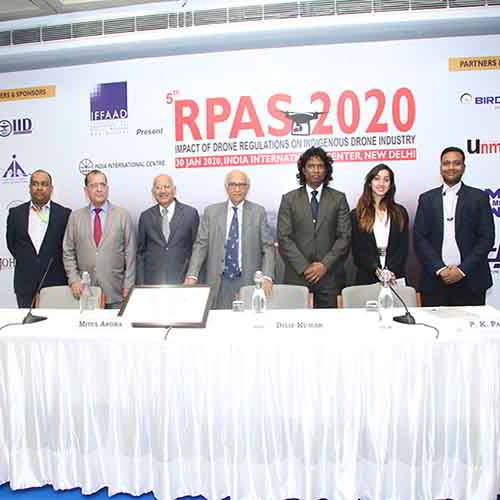 Dr Prashant Kandu – CEO – Centre for Creativity and Innovations spoke on the topic “Challenges faced during Drone registrations” and a Panel Discussion on “Effect of Global Regulations on Import & Export of Drones” which comprised of esteemed panelists from the drone industry like Shri Mitul Arora – Policy Lead – DJI India Rep, Shri Dilip Kumar – Joint General Manager – Airports Authority of India, Praveen Kumar Pandit – Documentary Film Maker – One Twenty Frames Productions & Lt Cdr John Livingstone who was the moderator for this Panel Discussion. There were more than 150 Individuals from the drone industry who took part in an engaging discussion with all speakers especially with Shri Amber Dubey – Joint Secretary – Ministry of Civil Aviation who after taking office has done a phenomenal work of getting the industry organized together and successfully managed the enlistment of unregistered drones with the ministry of civil aviation. Dr. Rajeev Kumar – Vice President –NITI Aayog addressed the conference and emphasized the importance of the Drone ecosystem and how this will be pivotal in the growth of the Indian Economy. With drastic developments in the commercial and Defence uses of drones, India is set to become the Drone hub of the world in near future provided the government and private stakeholders work hand in hand.

Johnnette Technologies Pvt Ltd. is a pioneer in the development of Unmanned Systems Technology in India. The company was started in April 2010 and since then the company has been providing cutting edge high-quality aerospace systems to the paramilitary, commercial, aerospace and defence sectors.. The training wing of Johnnette Technologies Private Limited, Indian Institute of drones (IID) is a registered non-profit organization under the educational trust acts India with Uttar Pradesh Government. The institute has already trained more than 1400+ drone pilots.