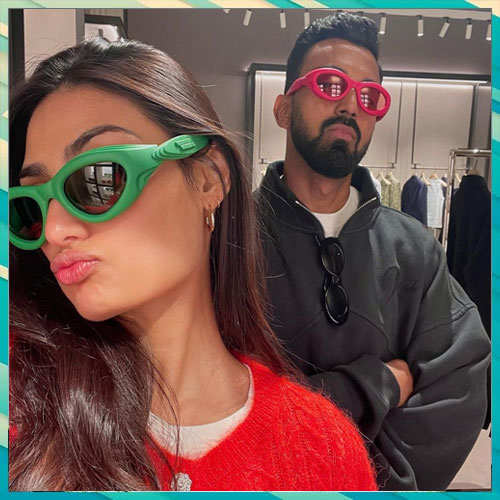 Actor Suniel Shetty, when asked about the wedding of his daughter-actor Athiya Shetty with cricketer KL Rahul, he confirmed that it will take place soon. The actor was at the launch event of Suniel's crime thriller series Dharavi Bank.

Athiya Shetty and KL Rahul have been together for a few years. She also accompanies him on his tours sometimes, while also going on vacations together. The duo made their relationship official, when the cricketer attended the premiere of her brother, Ahan Shetty's debut film Tadap in 2021. The couple posed together at the event.

Suniel, too, has been spotted at KL Rahul's cricket matches.

At the event, Suniel said, "Jaldi hogi (it will happen soon)."

This is not the first time that Suniel has spoken about Athiya and KL Rahul's wedding. Earlier this year, when he was asked about the wedding by another media house, Suniel had said, "I think jaise hi bachhe decide karenge (it will happen as soon as the kids decide). Rahul ke schedules hai. Abhi Asia Cup hai, World Cup hai, South African tour hai, Australia tour hai. Jab bachho ko break milega tab shaadi hogi. Ek din me shaadi nahi ho sakti na? (Rahul has busy schedules, Asia Cup, World Cup, South African tour, Australia tour. The wedding will happen only when the kids get a break. It can't happen in a day, no)?"

Athiya turned 30 recently and Rahul dropped a series of pictures featuring the birthday girl. Sharing the photos, he wrote, "Happy birthday to my clown (he used clown face emoji) you make everything better."

Athiya made her debut on YouTube as she opened her channel a few months ago. She was last seen in Motichoor Chaknachoor, alongside Nawazuddin Siddiqui. She made her acting debut in Salman Khan's Hero along with Sooraj Pancholi in 2015.