Vigilance stepped up across the country ahead of the Ayodhya verdict 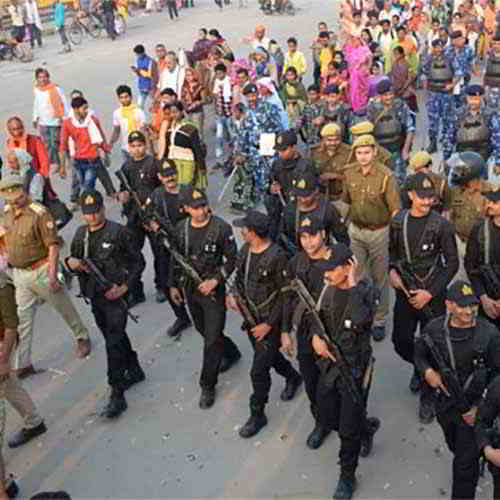 As the Ayodhya verdict draws near, the Centre is strengthening its security preparedness. 4,000 paramilitary personnel have already been rushed to Uttar Pradesh while the Railway police cancelled leave of its force, thus stepping up vigil at 78 major stations and on trains.

The railway police issued a seven-page advisory to all its zones giving them a slew of instructions on security preparedness, sources said. The advisory covers aspects like security at platforms, railway stations, yard, parking space, bridges and tunnels as well as production units and workshops, which could either be a site for any violence or could be used to hide explosives. The RPF advisory has further identified around 78 major stations with high footfall including stations in Mumbai, Delhi, Maharashtra and UP where the presence of RPF personnel have been increased. It also asked zones to ensure there is no leakage of information about VVIP or military movement during this time.

Additionally, the Ministry of Home Affairs (MHA) on Thursday issued a general advisory to all the states and Union territories asking them to deploy adequate security personnel at all sensitive places. Political leaders on their part made fresh appeals to people to not indulge in making provocative remarks or spreading rumours.

"The decision of the judiciary is paramount. I would like to urge the public that people should not indulge in any provocation and social harmony should not be disturbed," Rajasthan Chief Minister Ashok Gehlot told reporters in Jaipur.

According to sources, Prime Minister Narendra Modi has asked his council of ministers to refrain from making unnecessary statements on the Ayodhya issue.

Meetings are also being held by police with members of Hindu and Muslim communities with an appeal to them to maintain calm.

"All of them have agreed to abide and respect the judgement," Bengaluru Police Commissioner Bhaskar Rao told reporters.

The Vishwa Hindu Parishad (VHP), meanwhile, has stopped stone carving work for the construction of a Ram Temple in Ayodhya for the first time since 1990.

All the artisans involved in the work have returned to their homes, said VHP spokesperson Sharad Sharma.

Chief Justice of India (CJI) Ranjan Gogoi, who is heading the 5-judge Constitution bench hearing the Ram Janmabhoomi-Babri Masjid land dispute case for several weeks is retiring on November 17. The apex court is likely to deliver its verdict before he retires.