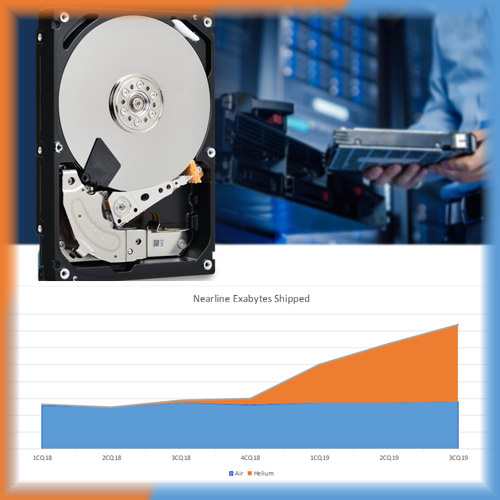 TRENDFOCUS’ report shows that total Nearline HDD shipments topped 19 million units in 2CQ21, smashing the previous record of 17.19 million set in 1CQ20. And for the first time, Nearline HDD exabytes shipped surpassed the 200 mark as it reached 243 exabytes for the quarter.

“Setting back to back quarterly Nearline HDD unit and exabyte shipment records is a testament to all of our employees’ hard work and dedication, as we continue to navigate through a very challenging supply chain environment,” said Kyle Yamamoto, Vice President of TAEC’s HDD Business Unit. “2CQ21’s solid results reflect our broadening partnerships across key cloud, OEM and channel customers, as we continue to invest in manufacturing scale to support their growing storage demand.”

As a global technology company that has been innovating in storage for years, Toshiba offers a comprehensive portfolio of HDD products that address the storage needs of enterprise, datacenter, surveillance, and client markets. Toshiba solves customer challenges with innovative HDD models focusing on four primary market segments. The AL Series focuses on the Enterprise Performance segment; the MG Series is aimed at Enterprise Capacity and Data Center needs; the MQ Series covers the broad spectrum of use cases that require Mobile Client HDDs; and the DT Series addresses the surveillance and traditional Desktop Client use cases.